Home » Valentini in the Miami Herald: Past, Present and Future 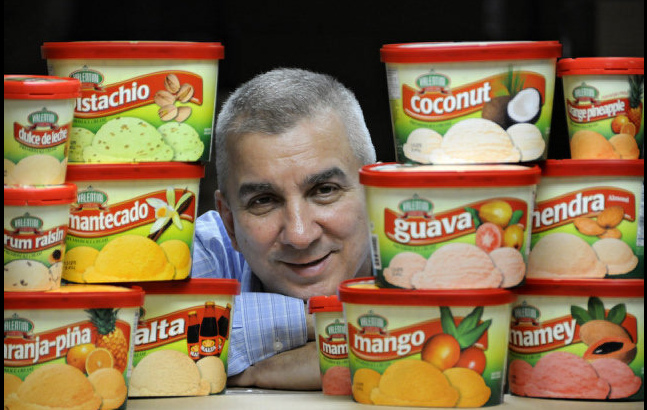 For the first seven years he was employed by Valentini Ice Cream, the company his former father-in-law founded in 1966, Charlie Wright worked in an office that was once the family’s living room at their Hialeah house.

“He came here with nothing,” Wright said. “We only wish he was around today to witness what was happening.”

What is happening is a growing presence in the $10 billion a year ice cream industry. Annual sales for Valentini are now approaching $20 million, with 45 employees split between a Hialeah factory and a Medley office, Wright said. Driven in large part by the launch of its own Hispanic flavors brand in 2009, Wright said Valentini has grown on average 18 percent annually, despite the recession that has crippled the rest of the country.

Distribution has spread from its South Florida niche to central and north Florida, Texas, New York and New Jersey, as well as the Caribbean and South and Central America. And on June 10, Valentini will begin producing its Hispanic flavors in New York as part of a deal with Fieldbrook Foods, a Buffalo-based company that produces 25 million gallons of ice cream annually. 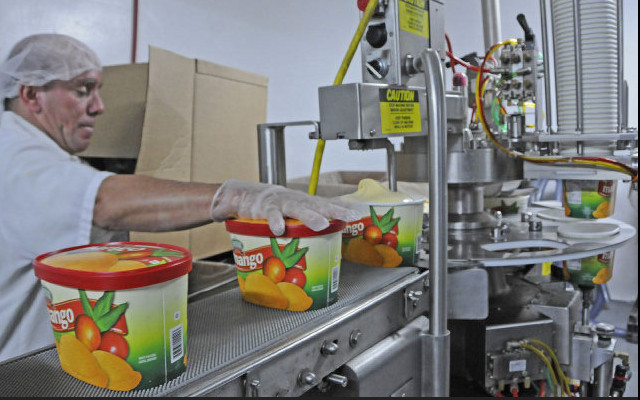 In addition to being stocked in Hispanic stores like Sedano’s and Presidente, Valentini can be found in more than 200 Publix Super Markets — one of the nation’s 10 largest chains — as well as Walmart and Winn Dixie. The company is also finalizing a move to a new 36,000-square-foot facility. The move will allow the company to unite its offices and plant, now housed in two buildings totaling 20,700-square-feet, under one roof.

“It felt like we were on to something huge,” Wright said. “And it’s proven to be so.”

Indeed, Hispanic buying has been heralded as one of the most dramatic changes in the U.S. market. In a 2012 report, Nielsen concluded that with the Hispanic population expected to grow at more than triple the rate of the total population over the next four decades, Hispanic buying power cannot be dismissed as a “passing niche on the sidelines.” Rather than disappearing into the “melting pot,” Hispanics should be considered a “fundamental component to business success.”

In 2010, Hispanics spent an estimated $1 trillion, Nielsen reported. That buying power is projected to rise to $1.5 trillion by 2015, with the number of Hispanic households earning more than $100,000 growing by 71 percent between 2000 and 2011 — nearly twice the rate of total households.

Over the years, Valentini staked out its small niche in local ice cream parlors by making tropical flavors and other products. Founder Orlando Valentini, a Brazilian, relied on his own Italian roots to make exotic creations like the Cassata Tartufo, which the company still makes by hand. In the 1990s when he retired, Valentini handed control of the company over to his daughter, Lislei Gamarra, and Wright. 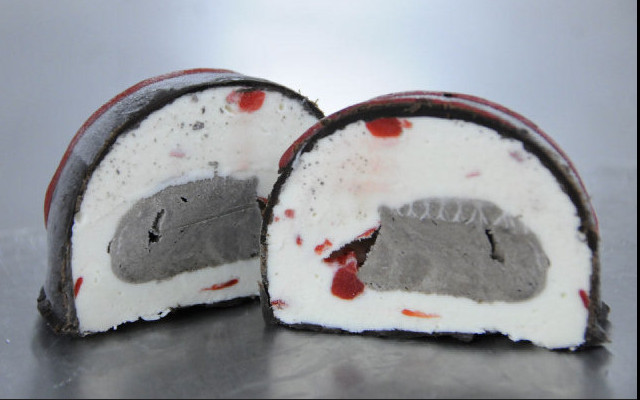 They continued to grow the company, expanding to restaurants like Johnny Rockets and Versailles Restaurant, and making private store brands. Distribution also became a large part of the company after they secured local distribution rights for Nestles and two of its other brands, Edy’s and Haagen Dazs. But the only product it retailed under its own brand was a tropical sherbet.

Then a few years ago Gamarra and Wright, who grew up in North Miami Beach in a household run by a Cuban mother, decided they were neglecting their own brand. And their own Latin roots.

“It was always our dream to see our ice cream on the shelf,” he said.

So they decided to take the plunge. They slowly began rolling out their Hispanic flavors, competing, it turns out, with major players like Nestles, which launched its short-lived Delicias line in 2009 with flavors including Tres Leches.

For Wright and Gamarra, who started working for her father when she was 15, getting the flavors correct and maintaining the quality they believed defined their ice cream was key.

The company, Wright said, only uses pure fruit puree to flavor its ice cream and pays for more expensive imported fruits: mangos from India, coconut and guava from Colombia and Mexico, and mamey from the Dominican Republic.

Wright believes the “mistake the broadlines make is a token gesture. They develop it in a lab with four little drops and a hint of mango. But if you’ve grown up in a Hispanic market, with mango trees in your backyard, you’re not going to eat something that’s more or less mango.

“A few years ago the general manager at Versailles wanted guava [ice cream], but he wanted it to taste like he was sitting in a tree in Cuba. And that resonated. That’s what people wanted.”

At its Hialeah plant, a giant vat mixes the fruit puree and cream before it is poured into 48 oz. cartons and whisked to a hardening room kept at 20 degrees. Manned by a worker in a snowsuit and ski mask, cartons are stacked onto pallets to be moved to a holding room and eventually trucked to the distribution center.

“The quality of the ice cream is compromised by the heat, so you have to get it from the machines to the hardening room ASAP,” Wright said.

The plant can produce up to 1,000 48 oz. containers per hour. Valentini currently offers 50 different flavors (with mamey far outselling any other flavors), and 78 products, Wright said. Flavors are based on what customers like, and what the owners think will work.

“Being Hispanic doesn’t hurt, and having our own unique taste buds,” Wright said.

But getting coveted space in supermarket freezers takes more than attention to quality and experience. And it turned out to be the company’s biggest hurdle, Wright said. 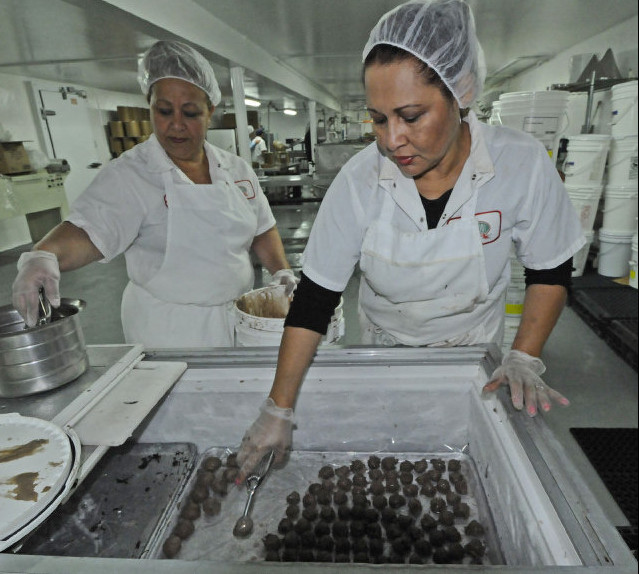 “The challenge was to convince them this was something the market needed,” he said. “There’s only three companies that distribute ice cream to Publix: Nestle, Valentini and Blue Bell. So it’s very challenging to compete.”

While the International Dairy Foods Association reports that vanilla is still the top-selling flavor, with about 1.53 billion gallons of ice cream produced in 2011 (the last year numbers are available), increasingly consumers want more exotic flavors. Some companies are releasing seasonal flavors like peppermint and gingerbread, or teaming up with candy-makers, the IDFA reported. But at the IDFA’s annual competition in March, it was the tropical flavor — neapolitan of mango, coconut and pineapple — that won top honors.

Wright explained that the company followed a strategy of securing its own backyard before expanding at a pace it could manage.

“We started in the Hispanic supermarkets here locally: Sedanos and Presidente. And that created a buzz. They started seeing we were getting a lot of space in stores and making a mark, then Publix was the first to take a risk.”

Publix stocked Valentini’s in November 2009 in just a handful of stores as an introduction to customers, spokeswoman Kimberly Reynolds said by email. Publix would not share sales numbers, Reynolds explained, but said Valentini is competing well with well-known national brands.

“Customer requests for the ice-cream poured in, so we continued to expand it,” she said.

Valentini now has an entire freezer door of its own.

“People don’t realize that when you have a full door in Publix, especially for a little company like ours, that’s very difficult,” Wright said.

Since March, he said, sales have been up 150 percent. As the company grows, he said, the challenge will be keeping up, complicated in part by the volatility of the ice cream. In most cases — up to 70 percent — manufacturers market their ice cream regionally. Only 16 percent market nationally, an indication of just how tricky the industry is.

“I used to tell my father-in-law, why couldn’t you sell toilet paper?”